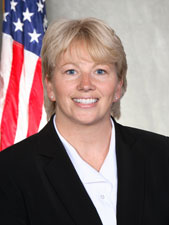 Jackie and her husband Kevin have three children Samantha, Ashley and Kevin Jr. Jackie was born and raised in Brockport and is a lifelong resident. Jackie is a graduate of Brockport High School (89), from there she continued her education at Monroe Community College and SUNY Empire where she received a degree in Business Management and Economics. Jackie has been an employee of Wegmans Food Markets for the past 26 years.

Jackie feels privileged and honored to serve as an advocate for our community. Jackie was recently a Clarkson Councilperson, and a member of the Clarkson Zoning Board for 7 years, was the Chair of the Sweden Clarkson Wall of Honor, Chaired the Veterans Memorial Park Project and was a member of the Recreation and Parks Advisory Council for Clarkson where she has learned to pull people together and get people involved in the community. Jackie was a volunteer for Clarkson Good Neighbor Days and Monday Nites Music in the Park Series in Clarkson. Jackie is also very involved in the community through activities with her children: Girl Scout Leader, Softball Coach, Booster Member of the Brockport High School Baseball and Football Program.

Being a Monroe County Legislator will allow Jackie to use her everyday experiences, education and common sense as her foundation to serve those throughout the Clarkson Community. Jackie has a vested interest in all aspects of community from master planning/commercial and residential development issues to municipal services and budgetary priorities.